At one of the first conventions of American businesswomen, the delegates shared stories of how their work as Walker agents had transformed and enriched their lives.

With few career opportunities open to black women during the early twentieth century, many had been maids, washerwomen, cooks and sharecroppers. A few had been teachers and nurses. Now they talked of the financial rewards that allowed them to purchase homes, educate their children and contribute to their churches and community organizations. 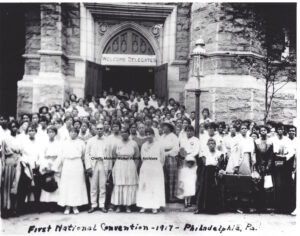 Margaret Thompson, president of the Philadelphia Union of Walker Hair Culturists told her colleagues that she had earned $5 a week as a servant. Now she claimed an income of $250 a week (the equivalent of more than $5,200 in 2017 dollars).

On the final day of the convention Madam Walker’s theme was “Women’s Duty to Women.” She envisioned these economically successful women as community leaders and agents of change.  To emphasize the point, she gave $500 in prizes, not only to the women who had sold the most tins of Madam Walker’s Wonderful Hair Grower, but to those whose local Walker clubs had contributed the most to charity.

At the end of the convention, the women sent a telegram to President Woodrow Wilson urging him to support legislation that would make lynching a federal crime.

“We, the representatives of the National Convention of the Madam C. J. Walker Agents, in convention assembled, and in a larger sense representing twelve million Negroes, have keenly felt the injustice done our race and country through the recent lynching at Memphis, Tennessee, and the horrible race riot at East St. Louis.”

“Knowing that no people in all the world are more loyal and patriotic than the Colored people of America, we respectfully submit to you this our protest against the continuation of such wrongs and injustices in this ‘land of the free and the home of the brave’ and we further respectfully urge that you as President of these United States use your great influence that Congress enact the necessary laws to prevent a recurrence of such disgraceful affairs.”